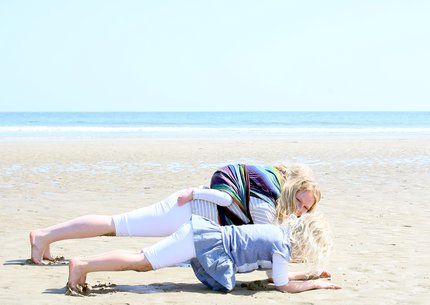 Theresa Mellor, mum of two has always been sporty but when she fell in love with babywearing, a new business was born. Kangaroo Fitness is designed with the new Mum in mind. You get to wear your baby as part of the workout!

‘I HAVE ALWAYS BEEN INTO sport, competing in swimming from a young age. At school my work experience was in a gym which I loved. I first started teaching fitness 24 years ago but took a break from it when I retrained as a Paramedic, met my husband who was a doctor in A&E and later had my daughters, Erin, now six, and Imogen, two. I exercised through most of my first pregnancy but ended up with a DVT and pulmonary embolism during my second so was pretty unfit afterwards. I looked for classes to go to but there was nowhere to take my little one. A few of my friends were in the same position and asked if I would consider running a fitness class that they could bring their little ones along to. At 41 I had thought I was past fitness teaching, but I set up a company called Baby Loves Fitness, specialising in the pre and post natal phases. I wanted to take it a step further. As I was already used to wearing Imogen in a carrier I decided to try and exercise at the same time. This is when I came up with the concept of Kangaroo Fitness, a class you can do whilst wearing your little one. For months I tried out different exercises and after some discussion with a friend who’s a midwife I put together some lesson plans.

During the class, the mums take part in low impact cardio, core and pelvic floor exercises and strength work with resistance bands. The weight of the baby adds to the intensity. I have done research into Diastasis Recti, which seems to be overlooked when it comes to postnatal fitness. For most of the session the babies are in a carrier, towards the end we do some work on the floor with the babies next to their mums. I started with just babies in the class, but as I wear Imogen on my back to teach, which she loves, I now have older ones in the classes too! Not only do the mums get an all over workout, they get to bond with their little one at the same time. I have had mums come to my class for the first time, self conscious because they have put on weight, and who have not done any exercise for the last year. Then within a couple of months they are signing up for a 5k run and are able to do a 2 minute plank! Being a slightly older instructor and having two young children of my own, I know how exhausting, and sometimes, lonely, having a new baby can be. The fact that they have made it to a class is a huge achievement in itself. It doesn’t matter if they want to stop and feed or if a baby can’t settle, everyone in the class has been there! Fitness is a massive part of it, but the mums support each other and make friends.’ Check out babylovesfitness.co.uk. 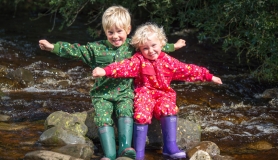 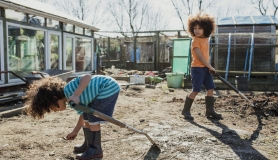 Reconciliation can be a difficult balance to achieve especially when the forces of negativity are well and truly at play. So how do we get our children to take a step back, breathe and communicate what they are feeling before it becomes a volatile and physical situation? 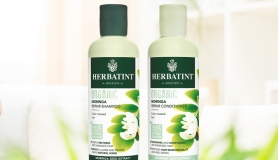 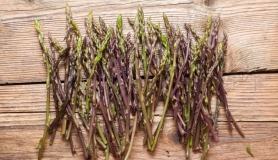 What to Forage For in Winter

It may seem as though the hard winter ground will not provide any nourishment for foragers but look hard enough and you'll find wild greens ready to spice up your soups and stews.