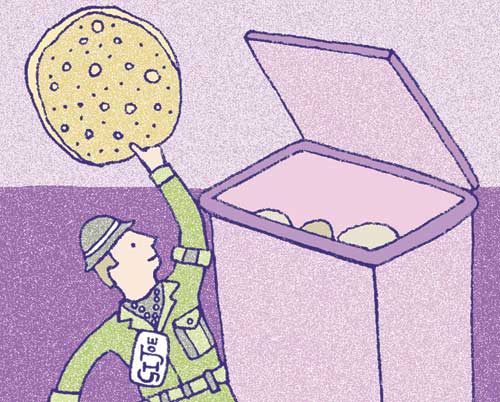 Hooray! A few centimetres taller and two teeth the lighter, Elliot has returned from a few weeks away with his Dad. Despite enjoying the break from everyday parenting, I missed him. So, as you might imagine, we’re both very happy to see each other again. We celebrate our reunion by heading down to the local pool for a swim with some old friends. As I sit back, proudly watching Elliot show me his underwater swiggle (a cross between a swim and a wiggle) my friend pulls out a big bag of snacks for the kids. Whoops! In my hurry to get to the pool all I’d brought was an apple for Elliot and some almonds to share. But here, laid out for us all was a spread of giant cookies, cakes, crisps, sausage rolls, sweets – a veritable feast of junk food. I could feel my blood-sugar rising just looking at it. Now please don’t get me wrong, I’m cool with people eating junk food if that’s what they choose to eat, but personally we see very little of it. For me, 85% chocolate is about as naughty as it gets. For Elliot, a chocolate bar of his choice once a week. Immediately I know I’m faced with a dilemma – cause a scene by not letting Elliot join in the junk-fest or, seeing as he’s not seen our friends for ages, let him have his fill of sugary madness. ‘Oh what the heck’ I think. ‘He’s not seen these friends for ages. Once in while won’t hurt him’.

“Thanks to our nutritionist friend, GI Joe, Elliot is well and truly versed in the art of junk food combat”

Two giant cookies, a packet of crisps and a bootlace later, it was time to pack up and go. We said our goodbyes and headed for the car. No sooner was he fastened in, the sugar-slump hit him. Hard. He must’ve peaked whilst running around on the grass, and was now well on his way back down. It began with a whinge. His eyes glazed over as his moaning progressed into a wail that mutated into a tantrum about nothing in particular. On our arrival back home, Elliot skulked off into the lounge. I watched him laying there, face down on the floor, fiddling limply with a toy. Where did my bright, shiny boy go? Kidnapped by the sugar monster it would seem. All that’s left is a grumpy shadow of Elliot’s former self. Thankfully, as his blood sugar levels returned to normal, so did his mood. I couldn’t help but feel a little cheated of a super-fun afternoon. But hey, we live and learn. (Or at least we’re given plenty of opportunities to learn – whether or not we actually use them is another matter entirely!) Talking of learning, for the past few weeks I’ve been reading up on the Glycemic Index (GI) of particular foods. No doubt you’ve seen certain labels mentioning whether what you’re about to buy is High, Medium, or Low GI. The Glycemic Index is a clever little system that ranks carbohydrates according to their effect on your blood sugar levels. Low GI carbs are converted slowly into energy, whereas high GI carbs cause steep fluctuations in your blood sugar levels. Surprisingly, chocolate (and I have to mention this by way of service to my fellow chocoholics) is fairly low GI, as the carbs are buffered by the fat. Woohoo!

What I’d seen today at the pool was a classic example of the effect of high GI foods on the body. The cookies, crisps and sugary sweets had rocketed Elliot’s blood sugar, which then rapidly dropped, causing him to go weak, moody and tired. So, biology lesson over, and I’ve resolved to tighten my controls over what passes Elliot’s lips. For my own sanity as well as his health.

The following weekend, my mother came to visit. She’s usually brilliant at checking with me in advance what Elliot’s allowed to eat – but, as is the nature of repetitive karmas – we both forgot. Enter Nana, with fresh salads, meats, fruits… and doughnuts. ‘Mmmm. Doughnuts!’ said Elliot, à la Homer Simpson. ‘Oh what the heck’ I thought. (Note the similarity of my thought process to the one I had at the pool for an example of what I mean by repetitive karmas) ‘He’s not seen Nana for ages. Once in a while won’t hurt him.’ Wrong! Half an hour and a doughnut later, Elliot was on the floor again, tired, moody and completely uninterested in playing with his doting Nana.

The thing with karmas – the areas of our lives we repeatedly struggle with – is that they tend to keep coming up and biting us on the bottom, often with increasing ferocity, until we can’t help but notice them. I was being given the opportunity to change an energy-damaging behaviour (eating food that is clearly not good for our health) into an energy-supporting one (making wiser dietary choices). So when just a week later (I told you these karmas are persistent!) Elliot won double prizes at a friend’s party and gleefully handed me a 300g bag of sweets, I knew what I’d have to do. Their destiny lay not in the warm tummy of my son, but in the deep, dark depths of the dustbin. I took some time to explain the nature of sugars and carbohydrates to Elliot, assisted by the appropriately named GI Joe, who Elliot now thinks is a nutritionist. He kindly approved certain organically produced, low GI chocolate, which Elliot was only too happy to swap for his bag of sweets. I helped him make the connection between feeling happy and bright, then feeling rotten after he’d eaten certain foods. Developing this kind of body awareness – making connections between how we feel and what we’re doing – is one of the things I’m passionate about in my work, and something I was only too glad to share with my son. 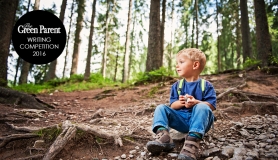 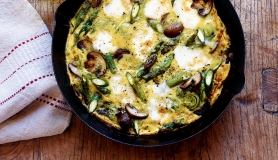 Frittatas are great carriers for seasonal vegetables when there’s some melted cheese thrown into the equation. Asparagus, mushrooms and Taleggio is my favourite combo in springtime says Rachel de Thample 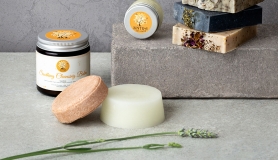