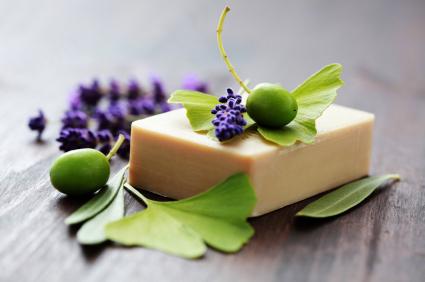 Just as home-baking ensures only the most wholesome and natural ingredients have gone into your family’s meal, making your own soap ensures only the gentlest ingredients touch your loved ones’ skin. While daunting in the first instance, much like making a brand new dish, once practiced a handful of times the procedure becomes a quick, easy, and, most importantly, enjoyable affair, and a valuable way to protect your own and your family’s health. Ellie Garwood gets creative and discovers how we can make our own natural beauty products ingredients, often straight from your back-garden, including nettles, lavender and chamomile.

toxic cocktail
A report released by natural deodorant company Bionsen revealed that, on average, women in the UK apply up to 515 different synthetic chemicals on their hair and skin every single day through grooming and applying make-up alone. Most mainstream shampoos, conditioners and shower gels contain a concoction of toxic chemicals, including such harmful ingredients as chorine, sodium lauryl sulphate and even formaldehyde. Making your own soap not only gives you the confidence that what you are applying to your family’s skin on a daily basis is safe and natural, but can also save you a handful of cash and ‘product miles’ in the process. Homemade soap can be given to friends and family as an extra special gift, uniquely tailored to each individual.

sharing the glut
One of the joys of making your own soap, again much like with the joys of cooking, is that you can utilise locally sourced Tina Furness started making soap when she and her family lived in Denmark ten years ago. She has since moved to the UK and continues to make soap as well as other grooming products for her family, from deodorants to shampoos, and even toothpaste: “Soap making is so amazingly easy once you get started. I tend to make a batch every now and again, and like with cooking, or with excess produce from the allotment, if you feel you’ve got too much it’s lovely to be able to give it away to grateful friends, family members and neighbours.” Tina explains why she began making soap in the first place: “So many people are concerned these days with what they put in their bodies, but don’t think the same about what they put on their bodies. Our skin is not a barrier; it actually absorbs what we put on it. It scares me to think how many chemicals are used in daily grooming routines – especially when it comes to young children and babies.”

synthetics take over
Soap as we know it was first introduced in the 1800s when Nicholas Le Blanc discovered a cheap and easy way of making caustic soda, or lye, the core ingredient of soap. Right up until the 1900s it was still the norm to make soap at home, predominantly using fats left over from cooking and butchering. Slowly, however, the art of soap-making died out. The change was initiated by the advent of World War One, and later Two, due to a lack of access to oils and tallow, which had previously been a stock ingredient in the soap making process. Scientists quickly discovered how to make synthetic grooming products and soon soap making was no longer a natural domestic process, but an increasingly complex scientific procedure performed in sterile environments using a cocktail of chemicals. Fortunately, over the last ten or more years, just as there’s been a cooking revolution, with the importance of well prepared homemade food coming to the fore, there looks to be a growing soap revolution bubbling up in the UK.

the soap revolution
Melinda Coss, author of Natural Soaps, and founder of Make Soap, believes that the market for homemade soap is on the up, and for good reason: “Our course numbers continue to increase month on month. Participants come from all over the world and we have welcomed people from as far afield as Australia and Japan, in addition to those from the UK. There has been a significant rise in awareness of the benefits of using only natural products on the skin and the cost of shop bought products is escalating.” Coss explains that: “Most of the well known brands of soap on sale in the supermarkets are actually not soap at all, they are ‘syndet’ (synthetic detergent) bars and if you check the labels the word ‘soap’ is replaced with ‘cleansing bar’ or ‘beauty bar’ or a similar phrase. These soaps can be very drying on the skin. Soaps made traditionally from botanical oils, herbs, shea butter and essential oils are rich in glycerine which moisturises the skin and they can be tailored to specific skin types.” Coss is keen to emphasise that not only is soap-making an important traditional craft, and fantastic for mums and dads keen to know what they are putting on their children’s bodies, but it’s also a potentially lucrative way to make money while having the freedom to work from home. Following a career in journalism, PR and writing, it was during a chance visit to a market that Coss first thought about setting up her own company: “I was in Australia at a craft market and discovered a stall selling handmade soaps. On my return, I discovered many small kitchen sink producers and as a single mum with three kids I was particularly interested in any skill people could use to generate money from home. To cut a long story short I started a business in my kitchen and ended up with a large industrial unit making handmade soaps for all the UK supermarkets, as well as stores such as Harrods and House of Fraser.” It took Melinda just four years to go from making soap in her kitchen as a hobby to occupying a large industrial premise and employing a small team.

learning the ropes
If you think a soap-making business might be for you, it’s best to get yourself booked on to an introductory course first, to learn about the procedures involved in soap making, and see first-hand if you enjoy the process. Many courses will not only teach you how to make soap, but talk you through the ingredients used too, and their specific benefits and properties. Coss explains: “Coconut oil, for example, produces a hard bar of soap which is rich in lather but used on its own it can be drying on the skin. A good bar of soap will contain coconut oil but be blended with maybe olive oil, sunflower oil and/ or shea butter to balance the formula. Weights and measures are critical. Once you’ve had some training and decided soap-making is for you it’s really a case of getting out there and putting your name around. With country and farmers’ markets becoming increasingly popular you may be able to get yourself a weekly stall selling your soap locally. Alternatively, you might want to offer your soap to local hotels, B&Bs and cafés; business owners are often keen to support local entrepreneurs and there’s something rather special about the sound of handmade soap.

If you are keen to sell to a wider audience the internet provides a perfect outlet for small businesses, affording you all the benefits of your own shop without the overheads. Before you begin selling however, you will have to make sure you’ve followed the correct official registering procedure, meaning you are licensed to sell, and are fully aware of EU legislation and regulations (correct labelling for example).

from hobby to business
Bev Scott-Hughes, from Storrington in Sussex, has a successful internet-based soap making business, Just Bev Soaps, which she started in 2009. Bev explains how she got into soap making: “I started up the company for two reasons, but the main reason was my kids. My son had both asthma and eczema at two; I worked out that bubble bath and soaps were the worse thing for his skin and some foods did not help. From then on I bought soaps that did not make things worse, and eventually came across glycerine soap. We made our own and this really worked.”

What began as a hobby for Bev soon turned into a business when she developed arthritis and was no longer able to continue her job as a reflexologist: “I tried to get a job in an office to no avail so I turned what had been a hobby, and helpful to my kids, into a business. The business was really born two years ago, the day I made my first batch of cold press soaps.” From then on Bev’s business went from strength to strength and she now makes a whole variety of scrumptious soaps, from flower- to cupcake-shaped soaps, foaming bath butter and even bath bombs. Whether you’re keen to join the likes of Bev Scott-Hughes and Melinda Coss and build your own soap empire, or you simply like the idea of learning a new craft, there’s something really special about being one of an increasing number of people embracing simple ingredients, following centuries’ old artisan procedures and making truly natural soap. With soap-making courses now widely available, internet sites providing limitless information on ingredients and hand-made soaps increasingly filling our stores, hand crafted soap has never been so accessible or en vogue, and for good reason. Chemical laden bathrooms have been the norm for far too long; it’s time to reclaim our grooming products and ensure our families and loved ones bathe with only the cleanest, greenest and most natural of handmade soaps.

• Natural soap recipes can be found on our website at tinyurl.com/makeownsoap

Ellie Garwood is a freelance journalist and proud god-mother to two beautiful children. When not writing on green and sustainability issues she can be found planting orchards. 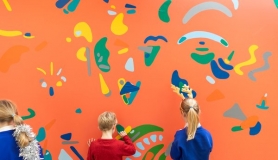 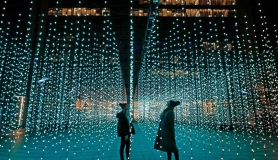 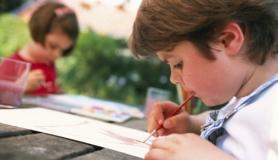 Make Your Own Finger Paint

With a few basic kitchen ingredients you can make great finger paints for your children that don't contain any dubious substances. Then, with a little foraging and creativity, you can colour them with wild flowers and leaves to create a truly natural painting experience.