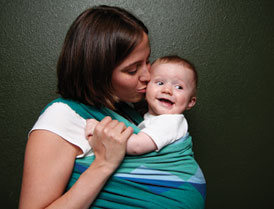 In this taster from the February/March issue of The Green Parent magazine, Jessica Richards looks at the history of babywearing and how it is growing in popularity today.

Baby carriers have been around for centuries; parents worldwide have always used long cloths, shawls, scarves and even bedsheets to snuggle up their babies and get the chores done. Even today many traditional types of carrier are still used in developing countries, where babywearing is totally normal, a necessity and way of life. Many cultures have a traditional baby carrier designed specifically to meet their needs. Mexican people use the Rebozo, a square of woven cloth tied over one shoulder with baby usually on the back. Guatemalans use a similar style sling called a Parraje. Peruvians have a Manta, which sits over both shoulders like a cape, and baby sits high on mother’s back. Aboriginal mothers used to keep their babies in carriers made of bark, similar to the cradleboards used by Native Americans but without the cloth covering. Traditionally, Welsh mothers used to wear their babies in warm shawls, called ‘Siol Fagu’ (nursing shawl), which look wonderfully cosy and snug for mother and baby. In the cold far North, Alaskan and Canadian people use a carrier called the Amauti which is a very thick arctic jacket, which has a baby ‘pocket’ in the back. A mother in Papua New Guinea will use a Bilum, a net bag secured at her forehead with her baby hanging behind her (they have very strong necks!). Indonesian mothers use a Selendang, which is a long ornate wrap. In other Asian countries, mothers use a variety of carriers including Mei-tai/Hmong/ Bei (China), Onbuhimo (Japan), Podaegi (Korea) plus many use a carrier of long straps which go under baby’s armpits and thighs for back carries. Ethiopian mothers use a blanket with top straps, similar to the sling used in Japan. African mothers use a ‘Khanga’ which is a short-ish piece of cloth tied around the torso, so baby sits low on the back. Maori women carry their babies in a cloth inside their cloaks, or in a flax Pikau (backpack).

DECLINE AND RISE
Sadly, in many of these countries babywearing has become less common because it is seen as something poor people do, and as only rich people can afford strollers, they have become desirable. Never mind the fact that they are often inconvenient and impractical. Modern society seems to have adopted the concept that the more you have, the better off you are. Interestingly, strollers were recently marketed in an African town but met with amusement and dismal failure to sell. The mothers wondered why parents would need such contraptions, and what was wrong with white people’s babies that they would need to be in such isolation!

With the movement to make babies independent and stop them being ‘spoilt’ by too much love and attention, babywearing has declined in western countries over the last 50 years. Mothers stopped learning mothering from other women and babies were put in pushchairs and cots and a whole range of objects created to avoid the ‘bad habit’ of carrying baby. This move away from traditional mothering followed the move of birthing from home to hospitals, and disempowerment of women as she was no longer trusted with the welfare of her own child. The State was determined to ‘rescue’ babies from their unknowledgeable families and encourage ‘proper’ medically lead care. It only took the first half of the 1900’s to undo centuries of mothering knowledge and support but it has taken 30 years to even begin healing this rift.

VITAL TOUCH
Later research has quashed the ‘spoilt baby’ theory and we know now that lack of love and touch actually severely delays babies’ development. They need and indeed crave bodily contact and movement in order to thrive. Many know about the devastating situation of the Romanian orphans, left in cots without love and touch, and how they have missed out on so much potential development as a result. This shows just how important touch is.

CHANGING PERCEPTIONS
Until recently, baby slings were seen as ‘only for hippies and native people’, made of pieces of cloth and not easy to use. But as Dr Maria Blois says in her book ‘Babywearing’, this perception has started changing in the last few decades.

Dr William Sears coined the term ‘babywearing’ which has gained in popularity since the 1980s. He sees baby slings as an extension of the womb environment, bringing with it many benefits for baby’s development and parents’ sanity! The babywearing community is incredibly lucky to have the ideological and practical support of this amazing paediatrician and father of eight, along with his wife Martha, a RN, lactation consultant and LLL leader.

The in arms phase is becoming increasingly recognised as an important parenting tool, and there is even a very highly sought after ‘wrapping school’, Die Tragenschule, based in Dresden, Germany. Medical professionals are beginning to realise the value of babywearing as a means of bonding with baby and aiding development. There is a now a huge variety of baby carriers to choose from, many made by working mothers or small companies who are experts in their field.

To read more of our special sling feature you can buy the February/March issue of The Green Parent magazine for just £3.50 (UK only) here or why not subscribe (Worldwide) and have every issue delivered to your door. 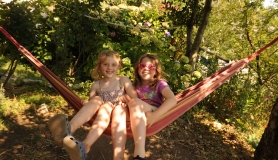 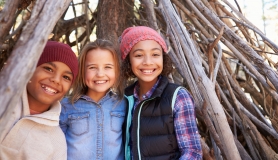 20 Alternative Schools in the UK 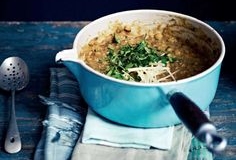 Anjum Anand explains how Ayurveda can help you to achieve optimum health. Ayurveda means science or knowledge of life and is thought to be over 5000 years old. It is said that Ayurveda influenced early health care around the world and many Eastern medical systems are thought to have their roots in Ayurveda. This science has two aspects – the preventative and curative. The preventative side guides us on how to avoid illness with the right diet and lifestyle, meditation and yoga. It states that everything we need to be healthy is all around us and empowers us to be our own healers. 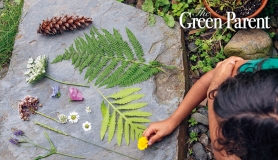 Art supplies needn't come from a shop. Nick Neddo scours the land for organic materials to make into creative projects.