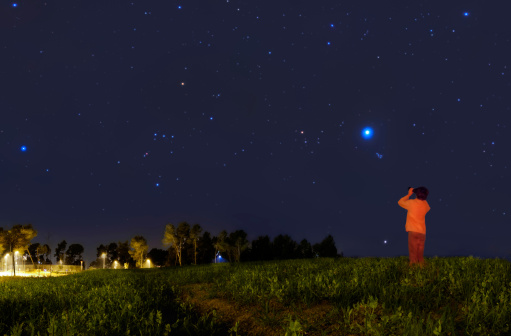 ONE OF MY EARLIEST MEMORIES is of walking in the Welsh countryside at night with my father and stopping to watch shooting stars darting across the sky among the twinkling stars. Astronomy has fascinated me ever since, and this love of the night sky has been passed on to my children. On dark, moonless nights they spread a blanket on the lawn, lie down, and try to make out the pictures made by the stars above their heads. Emyr Parri encourages parents to bring the night skies to life for their children.

In the winter and early spring sky my children look for Orion, the hunter, and they recall the story of how he threatened to hunt down every animal that lived on Earth, so Gaia sent a giant scorpion to kill him. In the spring sky they look for the great lion, Leo, which was killed by Hercules during his twelve labours. In fact, every season brings its own constellations with their own fascinating stories. If you imagine yourself outside on a dark, clear night looking up at the thousands of stars shining above your head, it might seem a daunting task to be able to find your way around. However, if you arm yourself with a basic star chart, it will be surprisingly easy to identify the more prominent constellations. If you do some research beforehand and discover the myths and legends about them, this will make your stargazing even more enjoyable. Because of the Earth’s motion around the Sun, the constellations you can see in the southern sky during the winter will be gone by the summer and you will have a host of new ones to explore, but some of the favourite star patterns are with us all year. One of easiest to learn is The Plough, also known as the Saucepan or Wagon, and in North America as the Big Dipper. This is often mistaken for a constellation but is, in fact, only part of the constellation of The Great Bear. All the stars we see in the night sky are suns, just like our Sun. They look small only because they’re so far away. In fact, some of them are over 1000 times larger than the Sun. They were all created in a nebula, a vast cloud of gas and dust in space. New stars are still being born in such clouds today. Stars do not shine forever; eventually they run out of fuel. An ordinary star like the Sun will take billions of years before it cools and dims. A very massive star will end its life in a huge explosion called a supernova. You won’t need an expensive telescope to enjoy the night sky, but if you have a pair of binoculars they will allow you to take a closer look at the faint, hazy patches you spot, which may turn out to be star clusters or nebulae. Remember that your eyes can take up to 30 minutes to adapt fully to the darkness, and during that time you will be able to gradually see fainter and fainter objects. A bright, white light from a torch, even for a second, will destroy your dark adaption, so if you need to use a torch, cover it with red cellophane because your eyes are less sensitive to red light.

STARS – Try to make out some of the more prominent constellations, such as Taurus, the Great Bear, and the spectacular Orion, which rises in the early evening in December and is high in the southern sky in January and February. Notice the colours of the stars. Identify the two stars Betelgeuse and Rigel in the constellation of Orion. Betelgeuse is an obvious red colour, while Rigel is blue. Blue stars are the hottest and red stars the coolest.

Look for other coloured stars, such as Aldebaran, which is the red eye of Taurus the bull. Sirius, the brightest star in the sky, which can be seen low in the South on winter evenings, is spectacular and seems to flash many different colours, but this is due to atmospheric turbulence rather than to the true colour of the star. Try to find Polaris, the North Star. The two stars at the end of the ‘bowl’ of the Plough are known as ‘The Pointers’. If you imagine a line drawn between them and extend it to about five times the distance between them, you will come to Polaris.

STAR CLUSTERS AND NEBULAE – Many stars are members of star clusters, which typically contain hundreds of stars that formed together in the same cloud of gas and dust. Several clusters are visible to the naked eye. The most prominent of these is the Pleiades, or Seven Sisters. This is the bright, compact group of stars that sits on the shoulder of Taurus the bull. See how many stars you can see in the Pleiades. One star-forming cloud is the Orion nebula, which is visible to the naked eye as a hazy patch just below the belt of Orion.

‘Remember that your eyes can take up to 30 minutes to adapt fully to the darkness, and during that time you will be able to gradually see fainter and fainter objects’

THE MOON – The most obvious thing about the Moon is its phases. On a sheet of paper draw 30 circles to represent the Moon. Put the current date under the first circle and subsequent dates under the others. Every night when the Moon is visible, fill in the circle to show its shape. This will show you how the phase changes throughout the month. You will also become aware of how the Moon’s position in the sky changes throughout the month and how the Moon appears to move among the stars. The dark areas on the Moon are ancient lava flows formed by volcanic eruptions. You can also spot circular craters, which were formed by meteors and asteroids impacts. Asteroids are small, rocky bodies that orbit around the Sun. When there is a full Moon, try to find the Hare in the Moon or the face of the Man in the Moon.

PLANETS – Venus, Mars, Jupiter and Saturn can be seen with the naked eye. They do not appear in fixed positions among the stars but seem to wander among them. Many websites will show you the current position of these planets. This winter, Jupiter will be shining brightly above and to the left of Orion. Four of Jupiter’s 67 known moons are visible in binoculars as small points of light near the planet. Look at them on different nights to see how they’ve changed their positions.

METEORS – Meteors, otherwise known as ‘shooting stars’, are not stars at all, but pieces of rock, mostly smaller than a grain of sand, hitting the Earth’s atmosphere and burning up. To see meteors you need a dark sky, so city lights and a bright moon will make them difficult to see. Although the best time for seeing meteors is between midnight and dawn, it’s possible to see them at other times. Meteor showers occur around the same dates each year. The best times this winter are the night of December 12, 2013 (before dawn would be best as the Moon will be quite bright), and January 1-5, 2014 (the thin crescent Moon will set early in the evening so favourable weather could mean a good show).

COMETS – Comets are made of ice and dust and are often described as ‘dirty snowballs’. As they approach the Sun some of the ice warms up and melts and this can produce a spectacular tail. Bright naked-eye comets are a fairly rare occurrence, the last one being comet Hale-Bopp which was visible with the naked eye for 18 months in 1996-1997. This winter look for Comet Ison. There are several websites where you can find where to look for it.

‘Shooting stars’, are not stars at all, but pieces of rock, mostly smaller than a grain of sand hitting the Earth’s atmosphere’

TRAVELLING TO A DARK SITE
If you live in an urban area then you may need to travel to find some dark skies. Don’t let that put you off discovering the wonders of the night sky. If you do travel away from your home, remember that winter nights can be very cold. Be sure to dress warmly and keep an eye on your children to make sure that they don’t get too cold. Dress in layers and make sure that you take a hat, gloves and warm boots with you. You might want to consider taking a survival blanket for each person in your party. These are made of metal coated plastic and will shield you against wind and rain. They are widely available for two or three pounds each and are an added safety precaution. Some people like to snuggle on the ground wrapped in a blanket or old duvet but remember that they can become damp very quickly, so you may need to put a plastic groundsheet down first. Take a warm drink in a flask. If you travel to a remote location, make sure that someone knows where you are going and when you will return. Take a mobile phone with you.

Emyr is a single parent to two boys. He lives in Wales and has been involved in astronomy education for many years. He is a Fellow of the Royal Astronomical Society 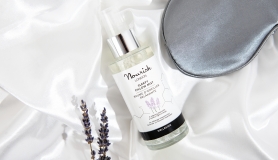 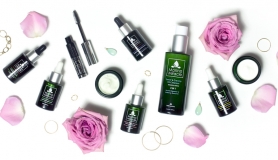 Marina Elisabeth Engervik is 31 and lives in Oslo, Norway with her husband and their one-year-old daughter. Her favourite place to be is in her lab researching and experimenting new formulas for her skincare brand Marina Miracle. 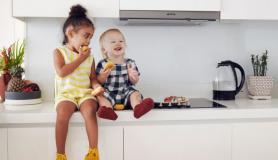 Sisters Bethany Jaroussie and Osyth Sanders set up Bimble and make leather mocassins,which are bright and cheery and great for kids’ feet 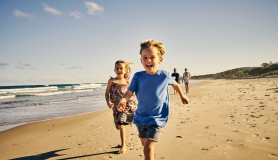 How to Protect Kids Skin

Playing outside is an essential part of growing up; climbing trees, hunting for jewel-like shells, poking crabs in rock pools, however, if the rays are beating down, it’s important to cover up your kids – their skin is thinner than adults’ and more susceptible to damage...